Families with young Star Wars fans may be particularly interested in a special training opportunities for young Padawans at Disney’s Hollywood Studios. It is called the Jedi Training Academy. This complementary daily entertainment is a stage show, character meet and photo opportunity.  Park guests between the ages of 4 and 12 are invited to sign up to participate.  At sign up, parents are given a time to bring the kids back to start their training.  This preshow event is highly entertaining by itself, as a Cast Member talks the kids through some of the basics of the Star Wars universe.

The young Padawan with us had a younger brother not quite old enough to join the group for the official training.  This did not stop the young Darth from crashing the training session in an attempt to join his brother’s class.

After about ten minutes of instruction, the children are lead over to the stage by the Star Tours ride.  There, parents and other spectators line up to await some more seasoned Jedi as they explore some mysterious ruins.  One note – there is a lot of waiting involved for the children with this activity.  If a child is not ready for this, it might be best to put this activity off for a future trip.  Also, this may not be the best event for children who have stage fright, as they will be on stage for the entire show.  Happily, Cast Members are well aware of this. They gently and discretely escort children off stage if needed.

Once all the students have learned a few basic light saber moves, they are ready to face the Trial of the Temple. Here, some of their deepest fears come to life in the form of Star Wars villains.  Our students faced off against Darth Vader and Darth Maul. 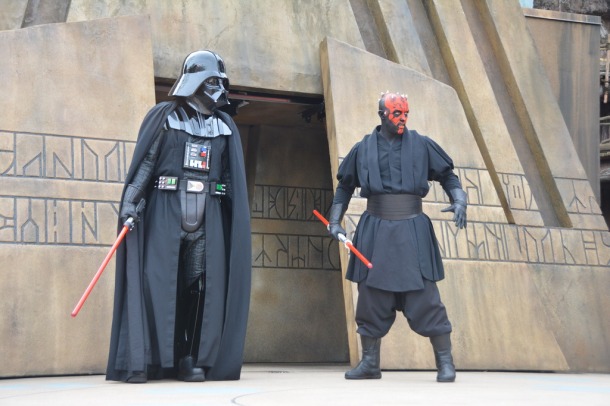 There is a whole fun spiel that incorporates Yoda’s voice, some lights and a story line about one of the adults who needs to face her fears.  She ultimately fights Darth Maul before realizing this trial is not about fighting.  Rather, it is about choosing not to fight by learning how to deal with fear.  The whole group successfully uses a force push to close the bad guys back in the temple.  A final pose for photos closes out the event.  Guests with MemoryMaker get the entire set of PhotoPass pictures from the event as part of their package.  That’s a nice momento of a trip highlight for little Star Wars fans!

And for those fans who might like to see the whole show….here’s the one we saw.  Enjoy!