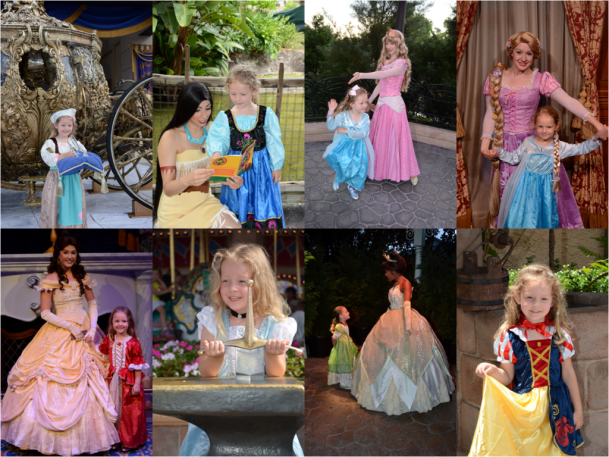 One of the best tips for children who enjoy attention from Cast Members and characters at Walt Disney World is to dress them up for their visit.  Over and over again I have seen a marked difference when my daughter wears her regular clothes into the parks and when she wears a costume.  Like so many other children, she loves dressing up.  It is a wonderful win-win.  She gets to dress like a princess for the day. I get to watch her light up when a bus driver announces there is a Princess on board or a character walks up out of the blue to join our picnic.

There are any number of ways to find costumes for kids.  Melissa and Doug have some great sets that are made to take the stress of children playing.  The Disney Store has tons of options.  Adults who can sew have a virtually limitless array of possibilities.  I’ve tried each of these costume options for my daughter, including one unfortunate attempt at making her a Frozen themed dress at home.  Then, I tried ordering a couple of princess dresses from MomApprovedCostumes (MAC), a business that kept getting rave reviews every time I came across a mention of it.

I knew we were on to sometime when the first dress came.  My daughter had become much less interested in dressing up because her Disney dresses irritated her skin.  We tried putting the dresses on over her clothes and that worked for awhile.  But this does not last long in the Florida summer heat.  After wearing a dress into the park, she would strip it off when it got too hot and hand the dress to me to carry around in the parks for the rest of the day.  With this experience in mind, my four year old gave me a quizzical look when I asked her to try the first MAC dress.  Then she pulled it over her head.  There were no buttons.  No zipper.  No strings and no velcro.  She looked at me in amazement.  “Mommy, it feels good!” Then she took off down the hall to play in it before I could ask her to take the dress back off.

Well, I eventually had to get her out of that dress to take a bath.  But not before she slept in in, wore it on a five hour car drive, marked it with a magic marker and spilled food on it on the way to Walt Disney World.  I thought the dress was done, but was willing to toss it in the washing machine at the resort to see what happened.  I was surprised when it came through the laundry just fine.

The durability of the dress and the lack of glitter convinced my husband not to say anything when more of these dresses started showing up at our house.  Well, he has been known to call glitter “the herpes of craft supplies” so anything that reduced the glitter in our lives was likely to be a hit with him!

While I am a huge fan of the MAC dresses, there are a few things to understand. MAC does not compete well with the Disney Store when it comes to sheer variety. MAC does not have a large selection for boys.  There are a few generic superhero cloaks and masks, some Star Wars cloaks and a few Prince outfits.  These are all high quality, but there must not be a large market for boys who like to dress up.  It would be great to see some cowboy (and cowgirl) options at MAC.  I would also really like to see some villains costumes.  And, well, if we are dreaming, how about some costume for moms who might want to pretend to be a princess every once in a while?

Regarding that extra attention from Cast Members and characters I mentioned at the start of this post….check out what happened one day when Mary Poppins saw my daughter wearing the MAC Cinderella day dress to have a picnic in front of Cinderella’s castle.

Well, that’s just a Magic Moment at Disney, you may think.  It could have happened to anyone. Mary Poppins didn’t just pop over because of the dress.  True.  That’s very true.  But does it explain the same thing happening again on a different visit?

I’d love to hear your thoughts.  What are your favorite ways to dress your kids for the Disney parks?

Note:  I neither requested nor received any form of compensation for this review.  All opinions are my own.  Or more accurately, in this case – mine or my daughter’s!

One thought on “Dresses Fit For Princesses”